Within the business and accounting world, there is a universe of concepts that resemble each other, but all of them have a different and important function. Among these concepts, there is the “Additional paid-in capital,” a fundamental part of the financial system of any company.

However, sometimes it is difficult to specify its function and the correct method to find it in a company.

In the following article, we will explain how to calculate the amount of additional paid-in capital correctly, and we will show you an example so you can understand it better.

The additional paid-in capital corresponds to the amount of money that a stockholder pays above the value of a share; this is included in the company’s equity account on its balance sheet.

It is an easy way for companies to raise capital through the shares.

How does the additional paid-in capital works?

Each share has a price called “nominal value.” In most cases, the nominal value of the share is established at a meager amount, and it is not related to the value that they may acquire later on the market; it is an arbitrary value generally close to $0.1.

In consequence, by issuing shares at a price higher than their nominal value, companies create their additional paid-in capital.

However, note that this additional payment does not depend on the value changes in the market; it only depends on the price designated in the issue of the share.

You can see more details in this graphic: 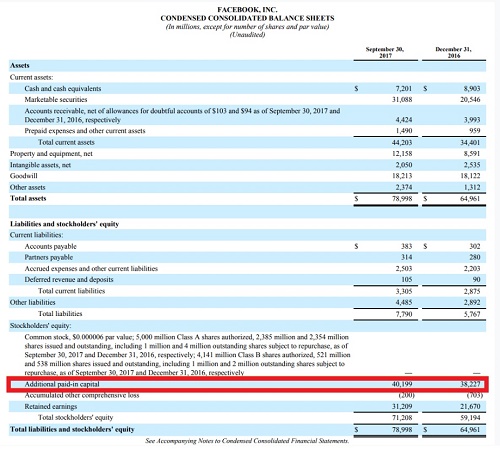 Setting a nominal value is a legal requirement; depending on the state legislation, it can also be known as the “declared value of the share,” and it must be shown in the annual balance reports of each company.

How to calculate it?

We must look for three fundamental elements to be able to calculate the additional capital paid, these are:

We can find these three essential facts in the company’s initial public offer, in press releases or news articles, or in documents that the company filed to the United States Securities and Exchange Commission.

If we cannot obtain this information in any of the previous documents or portals, we should look in the Total Shareholder’s Equity section, in the company’s balance sheet.

When you get all the elements we mentioned before, you can finally start to calculate. For example: Let’s say a company decides to make a public sale of 20,000 common shares; each share will be sold/issued for $ 50, but the nominal value of each one is $ 5.

The two steps that you need to do are:

It is a simple procedure that anyone in the company can do if they have the right information.

Generally, no one invests in a company without knowing it first, and the additional capital paid turns out to be an essential element in any company’s presentation.

It helps the new investors to evaluate how much they can earn from the total capital. Then, they will decide if being part of the project is worth it or not.